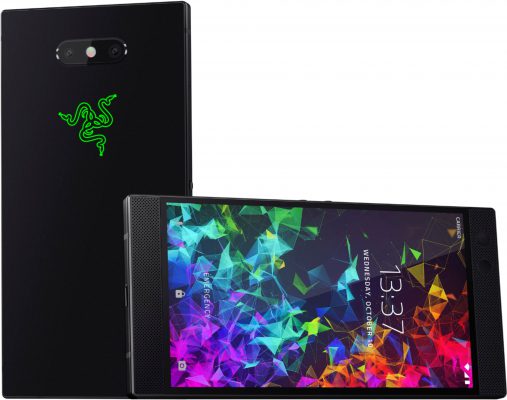 The ROG 2 has the same polarizing look as the original and I’m here for it. The rear panel is still as shiny as ever, complete with a huge customizable backlit ROG logo dead center. I’m still a fan of the slate gray and copper color scheme, particularly the way it accentuates the rear vent.

You’ll still find the side-mounted USB Type-C port/accessory port on the left, the power button on the right and another USB Type-C port along the bottom. The haptic air triggers have been upgraded but are still located on the right side of the smartphone.

Asus has yet to disclose the actual dimensions of the phone, but if the display is anything to go by, this is a massive phone. The first ROG Phone weighed in at 7.1 ounces, and measured 6.3 x 2.9 x 0.3 inches.

The ROG Phone 2 has a lot of firsts, including having a massive 6.6-inch display that’s AMOLED, HDR and has a 120-Hertz refresh rate with less than 1 millisecond of latency. That meant that when I was playing MegaMan Mobile, the titular hero’s blue chassis popped on the screen along with his red-colored foes. The framerates stayed smooth as I dodged, blasted and jumped my way through the level.

Like I said previously, the ROG Phone 2 has a lot of firsts going for it, and here’s another one. It’s the first gaming smartphone to utilize Qualcomm’s Snapdragon 855 Plus Mobile Platform. That means that similar to its predecessor, the ROG Phone II’s Qualcomm Kryo 485 CPU can be overclocked to a max boost speed of 2.96-GHz, which makes it one of the most powerful Android phones out there. I’m curious as to how it would hold up against the iPhone 11, however.

For the GPU, you have an Adreno 640 graphics chip, that Asus and Qualcomm claim is 15% faster than regular 855 CPU. Add in Qualcomm’s Elite Gaming technology, which focuses on smoother rendering and power efficiency, and you’ve got a serious powerhouse on your hands. To help things stay cool when the action heats up, Asus has upgraded its vapor-chamber cooling system.

Outside of the souped up CPU and GPU, you get 12GB of RAM and 512GB of RAM as well as Wi-Fi 6 and Bluetooth 5.0. The rear camera is a whopping 48 megapixels while the front shooter is a13-MP sensor with ultra-wide lens and laser autofocus.

Asus is also offering an Ultimate version of the ROG Phone 2 which comes in matte black and bumps the storage up to 1TB. Pricing and availability have yet to be announced for this version of the phone.

Gaming for an extended period of time can really take a toll on your smartphone’s battery life. To give gamers as much battery life as possible, Asus found a way to cram a gigantic 6,000mAH battery into the ROG Phone 2. The original only had a 4,000mAH battery and tapped out after 8 hours and 59 minutes on our battery test. I really can’t wait to see how long this sequel is going to last.

The ROG Phone 2 still offers a number of accessories to augment game play. My colleague and I played a fighting game with the smartphone docked into the WiGig adapter. which allowed us to play on the TV with a pair of Asus-branded controllers.

But if you want to play solo, there’s the ROG Kunai Gamepad. You simply snap the phone into the holder and it plays like a traditional handheld gaming device. And if you want more screen real estate (and who doesn’t?) there’s the new TwinView Dock II.

Asus has yet to reveal pricing for the new accessories, but if they’re anything like the original ROG Phone’s accoutrements, they won’t be cheap.

Asus is doubling down on the gaming smartphone market and refining it. The ROG Phone 2 retains the polarizing gamer aesthetic, but expands on the things that made the first smartphone great in the first place –– the performance and the display. I’m not convinced that all that power really translates to gaming, but when the ROG Phone 2 is in my hands, I’m sucked into whatever game I’m playing and that’s really the point.

I’m eager to put all that powerful hardware up against some of the heavy hitters in the smartphone world to see who comes out on top.