On Chinese social media app Weibo, Asus revealed a poster advertising the launch of the ROG Phone 2, which is set to be on the afternoon of July 23 (although due to time differences, it’ll actually be late at night on July 22 in the US).

This release date confirms what we previously heard in a leak (also on Weibo) stating we’d see the phone by September – by the sounds of it, we’re actually going to see the handset well before September, although usually devices are actually available to buy some time after they’re officially launched.

Update:
The ROG Phone 2 is now officially coming to the US and the good news is that it’s coming soon. You can pre-order the phone today, and it will apparently officially go on sale in ‘mid-September’. That’s for the regular version – there’s a slightly longer wait for the upgraded ‘Ultimate’ model, which is currently set to arrive some time in Q4 – i.e. October-December 2019.

What is the Asus ROG Phone 2?

ROG (which stands for Republic of Gamers) is a well-known brand for gaming phones, computers and gear, and the original ROG Phone was the first smartphone to carry this brand (Asus itself has a history making traditional smartphones). The ROG Phone 2 is set to be a step up in many ways.

How much will the ROG Phone 2 cost?

As expected, the ROG Phone 2 is coming in at the same price as the first model: €899. We’re still waiting for UK and US pricing to be confirmed, but we expect it to cost £799/$899, just like the first ROG Phone.

That’s for the regular model. If you want to jump up to the Ultimate, which gets you 1TB of storage, a matte black finish, and faster 2Gbps connectivity, it’ll cost you €1199.

In China the ROG Phone 2 costs 5,999 yuan (~$873), which is the exact same price the original ROG Phone retailed for. There is also a cheaper model supported by game publisher Tencent, but we’d be very surprised if that edition of the phone ever hit western shores.

What upgrades will the Asus ROG Phone 2 offer?

Before the phone was announced Asus confirmed that the phone will be the first to use Qualcomm’s Snapdragon 855 Plus Mobile Platform. This is essentially a suped up version of the processor that is already in a lot of smartphones. Asus said Kryo 485 CPU will run at up to 2.96GHz, while the Adreno 640 GPU is clocked 15% faster than the current 855.

There will be 12GB of RAM and 512GB of storage in the regular model, with a whopping 1TB in the pricier Ultimate edition.

Do some hardcore gaming for a while and the components will get hot so Asus has a vapor chamber and vents that lead the heat out. There’s also a second generation AeroActive Cooler II in the box. The fan clips to the phone and is four times quieter than the first model – it also doubles as a kickstand. 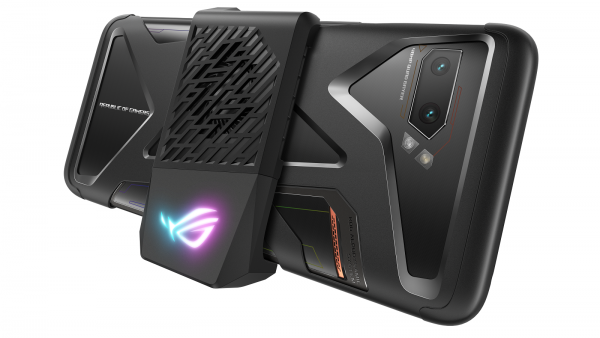 You don’t want the phone to die after a couple of hours like a gaming laptop, so Asus has increased the battery size 50% to 6000mAh. It promises 7 hours of non-stop PUBG action. Then charges quickly with 30W ROG HyperCharge using a standard 3A cable with Quick Charge 4.0 support too.

Asus has also thought about things like Wi-Fi antenna placement to keep latency to a minimum – with four different antennae dotted around the phone and optimise for landscape use.

The AirTriggers remain and have been improved so you can rest your fingers on them. Two vibration motors are better than before with a lower 20ms latency.

When it comes to audio, the ROG Phone 2 has stereo speakers that support DTS:X Ultra which Asus says are 2.5x louder than the speakers on the original. There’s also a 3.5mm headphone jack and four microphones around the chassis to ensure clear audio no matter which way you’re holding the phone.

The phone is about gaming but you’ll still want to take photos and video. So there’s a 48Mp main lens flanked by a 13Mp sensor with 125° ultra wide-angle lens – the exact same set up as the Asus ZenFone 6. There’s no flip-up mechanism like the ZenFone 6 but the front has a 24Mp selfie camera.

ROG to Launch ROG Phone in the United States on October 18th Oct 9, 2018 … Fremont, California (October 9, 2018) – ASUS Republic of Gamers (ROG) today
announces launch details for the ROG Phone, …Asus ROG Phone 2 announced and it’s the first phone with … 6 days ago … The Asus ROG Phone 2 has a Snapdragon 855 Plus chipset, and it’s the … is
among the biggest we’ve seen in a widely released smartphone.Best Smartphone for Gaming | ROG Phone | ASUS USA ASUS ROG Phone – The best smartphone for gaming with console-inspired
design, epic performance, unbeatable visuals & total gaming control.Hands on: Asus ROG Phone 2 review | TechRadar 5 days ago … Asus ROG Phone 2 is bigger and packs in more power than ever on an Android
phone. … We got to try the Asus ROG Phone 2 before its official launch and here’s
what …. Google Nest Hub Max release date, price, features and news …
TechRaAsus ROG Phone 2: News and Features | Digital Trends 6 days ago … The fast ROG Phone 2 is Asus’ new giant-sized mobile gaming monster …
Launch and release date. Asus … launch will come at the beginning of
September, and the phone will launch in the U.S., the U.K., and other regions.Asus ROG Phone 2 China price confirmed and it’s good news, folks … 4 days ago … The Asus ROG Phone 2 price in China has been revealed, giving us … including
an intriguing Tencent version, ahead of its release on July 31.Asus ROG Phone 2 Confirmed: Release Date, Price & Specs – Tech … 3 days ago … Asus ROG Phone 2 confirmed: Release date, price & specs … US. it will no doubt
be one of the most expensive gaming phones on the market, …Asus ROG Phone 2 gets an official release window and high-profile … Jun 6, 2019 … The Asus ROG Phone 2 has been confirmed for a July release with … mind the
first-gen ROG Phone took several months to expand to the US, …ASUS reportedly set to launch next-generation ROG Phone 2 in Q3 … Apr 8, 2019 … The ASUS Rog Phone 2 is reportedly coming in Q2 2019 according to reports out
of China, with … Let us know in the comments section below.ROG Phone – Wikipedia Website, www.asus.com/us/Phone/ROG-Phone/. The ROG Phone is an Android
gaming smartphone made by Asus and the first generation of … First released,
October 18th 2018 … 2 Accessories; 3 Reception; 4 Benchmarks; 5 References …

Watch Netflix on Laptop or TV in the basic plan

How to mine Pi Coin ?

Watch Netflix on Laptop or TV in the basic plan

How to mine Pi Coin ?